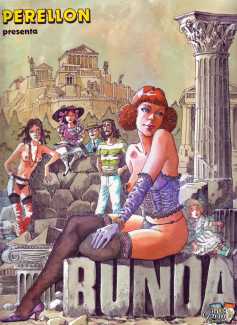 In the twilight of the seventies, comic publications for adults and the fashion of graphic eroticism converged. It was at this time that Celedonio Perellón graced the pages of the magazine Lui with a series of comics, Bunda, which celebrated this conjunction. When Lui ended the arrangement, Bunda fell into oblivion until she was rescued by Totem magazine in 1986, where she continued her presence.

‘Bunda’ is a Spanish/Portuguese word which signifies an ample and shapely female bottom, and Perellón’s title character displays this in all its glory at every opportunity. But Bunda has qualities far beyond her physical attributes. An intelligent and imaginative reader of Einstein’s Theory of Relativity, she has the power to control time, space and matter. A true superwoman, she needs no partner except for a flying and talking doll, which acts as Bunda’s subconscious. Freed from the constraints of history, her journeys are flights to explore the perfect orgasm, experienced with famous figures from history, who in turn offer their own takes on the sexual mores of their times.

In the pages of Bunda, eroticism and humour fulfil the mission of conveying pictorial entertainment, drawn and written by a skilled and imaginative artist who in his sixties could still evoke the qualities of lively youth.

Sadly, Bunda has never appeared in an English translation, though the original was in French and there was also a Swedish version, so here is a chance for you to improve your Spanish.