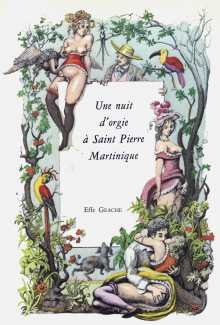 Une nuit d’orgie was ‘rediscovered’ and reprinted in 1961 by Book Hémisphères, a small publisher in Kervignac in Brittany, who commissioned twelve monochrome plates and a cover design from Siméon, who also produced colour versions of some of them. The monochrome plates were reproduced in a 1978 reprint by Calivran Reprints. Both 1961 and 1978 versions include a useful introduction to the novel by the noted erotica historian Pascal Pia, using one of his many pseudonyms, in this case Léger Alype.