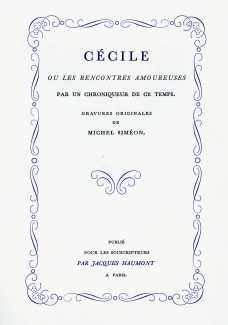 The author of Cécile, ou les rencontres amoureuses (Cécile, or Amorous Encounters) is the great Anon, described as ‘un chroniqueur de ce temps’ (a chronicler of these times), and is well-written and imagined, so it is a pity that it is no longer in print. Running through the book is the story of late-twenty-something Didier, a studious young man, who encounters the fun-loving, risk-taking Cécile. Together, sometimes with the addition of a couple of other young women, they explore young love in all its aspects, especially its more physically intimate ones, with regular experiments involving undress and sexual fondling in public places. Cécile was first published by the Paris publisher Jacques Haumont in 1951, and reissued ten years later with Siméon’s illustrations.

Michel Siméon’s twelve colour plates are finely-drawn and explicit, in a clean, spare style very much of the 1960s.

The Siméon-illustrated Cécile was published by Jacques Haumont in a limited, numbered, boxed edition of 516 copies.