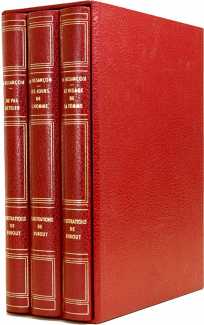 Who was Julien Besançon, the author of the entertaining trilogy that Albert Dubout was commissioned to illustrate by publisher André Sauret in 1966? First published in the early 1940s, the three volumes – Les jours de l’homme (Men’s Days), Le visage de la femme (A Woman’s Face), and Ne pas dételer (Do Not Uncouple) – are accounts, sometimes hilarious, of the problems brought by patients to their doctor’s surgery, and had been illustrated several times before Albert was given the opportunity to add his mark.

The answer is that nobody seems to know who Dr Besançon was, or even whether he actually existed; what we do know is that much of his down-to-earth advice is as sound now as it was then, advice which includes ‘In order to make love look after your face, and in order to look after your face make love’, and ‘It is perfectly possible for a person to have sixty years on their birth certificate, forty in their workplace, and twenty in bed’.

Again, we have not included all of Dubout’s illustrations in this portfolio, but quite enough to show how his inventiveness brings to graphic life many of the intimate questions so often aired in confidence to a medical professional.