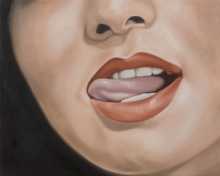 This large series of oil paintings created by Rubinstein are images taken from vintage pornographic films from the 1980s, predominantly those released around the time the pornographic film Deep Throat was released. The frames chosen are particularly striking as they focus on women’s faces during sex, which is an uncommon emphasis. The series of paintings branched out into stills of men and women kissing, showing vulnerability and the quality of sexual pleasure and romance.