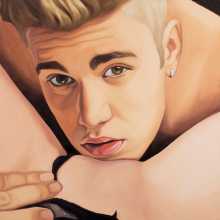 Rubinstein includes herself in many of her works, particularly prominently in this series, to tell her own story.