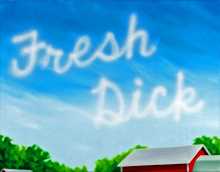 Starting in 2018, Alexandra Rubinstein started painting and drawing male genitals in a big way. As she explains. ‘I’m interested in diving into American masculinity through depictions of the often-censored male genitalia. Its lack of visibility in all types of media, and especially its lack of representation by women in the arts, is absurd to me, especially when you compare it with, say, breasts. It speaks to the patriarchal lens through which we still view the world, which gives the phallus its power while dehumanising men by neglecting their vulnerabilities.’

Here is a selection of her ‘dick pics’, starting with three paintings inspired by Gustave Courbet’s 1866 ‘L’origine du monde’, of a woman’s naked torso and vulva – Rubinstein’s versions are titled ‘The Origin of Anxiety’, ‘The Origin of Entitlement’, and ‘The Origin of the World’s Problems’. Then we have a cock on the psychiatrist’s couch – ‘Talk To Me’ – and on the ironing board – ‘I Just Want to Fit In’.

The next few works reference well-known paintings, including ‘The Creation of Adam’s Dick’ (after Michelangelo’s ‘Creation of Adam’), and the selection ends with a a male member who has given up – ‘Don’t Worry About Anything, They Said’ – and a set of ‘Cutting Boards’, a clear reference to circumcision.