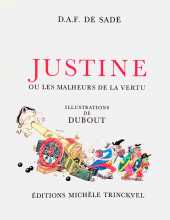 Not many illustrators have tackled full sets of illustrations to be enjoyed – if enjoyed is the correct word – alongside the infamous transgressive texts of the Marquis de Sade. Of the illustrators included on this website, only Leonor Fini has attempted a similar achievement, and it is interesting to note that while Albert Dubout chose (or was chosen) to illustrate Justine, the eponymous archetypal victim of sadism, Leonor Fini chose to illustrate Juliette, de Sade’s sequel about Justine’s nymphomaniac murderer heroine sister.

The Dubout-illustrated Justine, his third and last major work to be published by Michèle Trinckvel, appeared just before Albert’s death, and while it can be seen just as of more of his trademark taken-to-the-extreme imagination, there are surely also some of his deeper fascinations and wonderings at work here. Alongside the comic phallic architectural detail and French galante costumes is the constant threat of punishment and pain, and a sense maybe shared between Albert and Justine that however hard a human being might want to do the right thing there always hangs the dread shadow of failure.

Justine was published by Michèle Trinckvel in a numbered two-volume boxed edition of 965 copies containing an extra suite of the illustrations, and 5000 numbered copies as a standalone book.