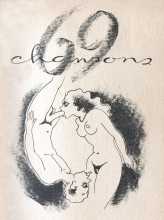 Here we have a rare survivor, a collection of popular bawdy songs much beloved of French students, especially medical students, with titles like ‘Le cul de ma blonde’, ‘Les tremblements de terre’ and ‘Les filles de La Rochelle’, accompanied by ‘lithographies inédites de Paul Claude’ (unedited prints by Paul Claude). ‘Paul Claude’ is clearly a pseudonym, for whom we have no idea. What the artist lacks in graphic skill, however, is certainly made up for in imagination, especially where the many outsize male organs are concerned.

69 Chansons was produced without any indication of a publisher in a limited numbered edition of 875 copies.