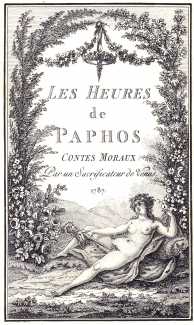 Les heures de Paphos: contes moraux (The Hours of Paphos: Moral Tales) is a collection of twelve erotic verse tales by an unknown author writing under the pseudonym Un sacrificateur de Vénus (A Priest of Venus). Each of the tales is finely illustrated with a high-quality engraving based on a drawing by Desrais. As they are not signed the attribution is not guaranteed, and some authorities prefer the safer ‘After Desrais’, but they are very much in the style of Desrais’ other work of the period. Why Paphos? Because Paphos in south-western Cyprus is said to be the birthplace of Aphrodite, the Greek equivalent of Venus, the goddess of love.