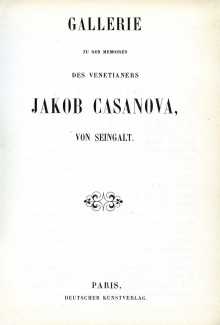 In the late 1840s he started work on drawings for a new German edition of the nine volumes of Casanova’s memoirs. His forty-eight drawings were engraved by Adolf Gnauth and published in colour by the Stuttgart-based Scheible publishing house under the fictitious imprint of Deutscher Kunstverlag, supposedly in Paris.

In 1980 Harenberg published a facsimile edition of Gallerie for a Bertelsmann book club, but sadly the quality of the colour plates in the reprint is unforgivably poor. They even managed to misspell the title on the book’s cover.