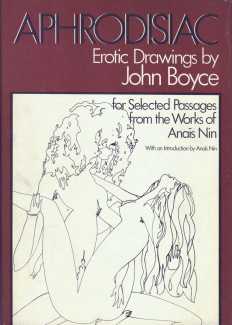 Aphrodisiac was published by Crown in the USA, followed by an international reprint by Quartet two years later. It is printed throughout in black and maroon, one of the must-have colours – olive green and slate grey being the others – of the late 1970s, and the book design is very advanced for the period.

John Boyce’s illustrations are very much of their time, with their frizzy hairstyles, pouty lips and Buddha poses. They are also remarkably sexually explicit for a mainstream book published almost half a century ago; it was almost certainly the collaboration with the highly-saleable Nin that made it relatively acceptable.