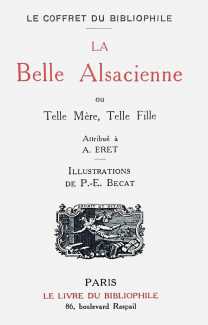 A bit of a pot-boiler for both Bécat and Le Livre du Bibliophile, this slight tale of eighteenth-century romance at least kept the artist busy, and Paul-Émile could be guaranteed to provide quality engravings with the appropriate amount of naked flesh.

The prolific French writer Antoine Bret (1717–92) is best known as a playwright, but he also wrote half a dozen novels featuring adventurous young women exploring their place in the world, sometimes with a classical background and sometimes closer to home. Such a theme is that of his 1745 narrative, originally titled La belle Allemande, ou les galanteries de Thérèse (The Beautiful German Girl, or the Gallantries of Thérèse), later better known as La belle Alsacienne, ou telle mère telle fille (The Beautiful Alsace Girl, or Like Mother Like Daughter).

The preface to this edition tells us almost everything we need to know about its heroine: ‘It is not Bret’s morality which lifts this novel. Thérèse does not display a deep, disappointing, or even merely embarrassing philosophy, but she does know how to find herself in picturesque, colourful situations, and is always on hand with wisely practical reflections. Mostly she recommends herself above all by having a good heart, understanding those kindnesses which facilitate life, and more particularly through the respect she demonstrates. These qualities are enough to make the reading of these short memoirs endearing, recounting the development of a girl who devotes herself to giving pleasure, without sparing either her body or her heart.’