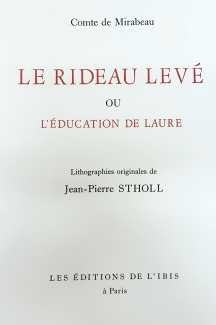 Le rideau levé, ou l’éducation de Laure (The Curtain Lifted, or the Education of Laura) is a classic sexual awakening fantasy, almost certainly written in 1786 by Honoré Gabriel Riqueti, the Count of Mirabeau (1749–91), though some sources attribute it to his contemporary the Marquis de Sentilly. Mirabeau was a free-thinking French nobleman who was involved in numerous scandals before the start of the French Revolution in 1789. The revolution established his reputation as a successful orator and champion of the people, favouring a liberal constitutional monarchy. Mirabeau wrote extensively on sexual freedom and exploration, L’éducation de Laure being his best-known work on the subject, including incest, convent lesbianism and youthful defloration.

Presented in the form of a letter to a friend ‘to cheer her up’, Laure’s confession depicts with immediacy the sensual and sexual initiation of the heroine. Very early on on her own, the young Laure happily lives the teachings of her ‘adoptive father’, and discovers, without even the idea of ​​immorality, the reality of pleasure. Mirabeau, with a novel which rapidly became a model of the genre, strongly reminds us that pleasure is learned and that pleasure is contagious. 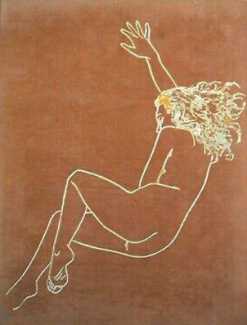 Though we are led to believe that the story is one of father-daughter incest, it turns out that Laure is not actually his daughter; he covered up the fact that his wife was pregnant when he married her. Thus the apparent incest is legal as well as pleasurable. Laure goes on from discovery to discovery, willingly helped by her nineteen-year-old governess Lucette.

One interesting aspect Le rideau levé is Mirabeau’s warning against sexual excess leading to forced or unwanted pregnancy; indeed to preserve Laure from premature excess her adoptive father makes sure she wears protective knickers when she doesn’t want to have sex. Very much ahead of his time.

The Stholl-illustrated Le rideau levé was published by Les Éditions de l’Ibis in a limited numbered edition of just 310 copies.