Xevi Solà Serra has a clear sense of what lies behind his work, describing it like this: ‘I’m a person with a lot of imagination, maybe too much, and one day I imagined I could be an artist and it seems I’m on the way. When I was young I started to write and draw graphic novels, that’s why I consider myself a storyteller more than a painter. However, now I have to tell a story using only one image. I have worked in many different jobs, but maybe working in a psychiatric hospital has particularly influenced the topics of my paintings.
‘I could define my work like filming a horror movie using relaxing pastel tones in order to achieve more effective scares. The motivation to make the first draft of each work comes mainly from the need to transmit a disturbing message, subtly disturbing if possible. I seek ways to give clues that refer to the darkest part of consciousness, the part refers to the instincts, sex, the pre-human and animal part, that part considered amoral, beyond good and evil. I seek not only the contrast between appearance and intentions of the characters, but I also try to communicate the visual strength in formal terms, for example with the use of complementary colours, contrast between vertical and horizontal lines, or contrast between the more finished parts and the less finished ones.’ 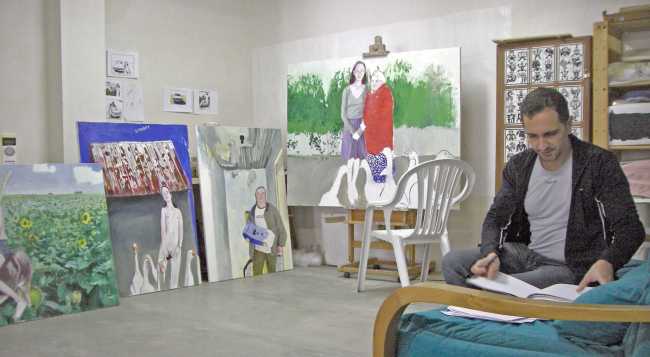