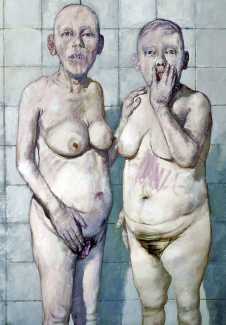 As Edward Lucie-Smith writes in his extensive monograph on Rustin, ‘By the mid 1970s the transition in Rustin’s work was complete. He had become not nly a figurative painter, but an artist on the borders of realism. It offers figures which seem completely tangible, in an abbreviated but convincing setting. Yet their relationship to most people’s experience of the world is mercifully rather tenuous. The characters, plump, bald, mostly naked – are they people who occupy the same world as our own?’

In many ways they do. Jean Rustin was not afraid to explore the corporeality of the human body and the unadorned, unbeautified, unsanitised aspects of nakedness, especially of both male and female genitals. He paints them in all their rawness and flabbiness, in many ways a much more honest and realistic introduction to the mechanisms of sex than any number of classical nudes.

It is unsurprising that he was often asked about the relationship between his work and his experience of mental illness. As he explained to Edward Lucie-Smith, ‘Many people believe that I must be well acquainted with the world of madness, and may even have spent some time in a mental hospital. Anyone who knows my work well understands that the question incorporates a very superficial vision of what I do. I want to remind every spectator, and above all myself, what we carry within us. It is true, and how could it be otherwise to someone as fascinated as I am with our place in the world, that I have always been fascinated by anything which has to do with the borderline between madness and sanity. Great writers have always explored this subject – Shakespeare, Beckett, de Sade, Baudelaire, Strindberg. And it is a fact that during the 1950s I spent a whole year painting massive murals at the Fondation Valée, a women’s psychiatric hospital. What I saw there shook me profoundly, both riveting and almost unbearable. Certain images are engraved on my memory. Is there a relationship between that period and my later work? I am not at all sure, but I can’t deny that there are enough links to make the question absolutely legitimate.’