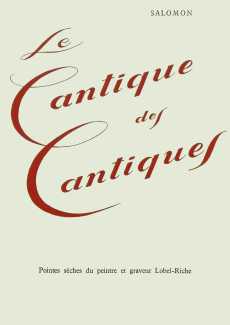 Le cantique des cantiques (The Song of Songs, also known as The Song of Solomon), is one of the books of the Old Testament of the Bible, taking the form of a series of love songs alternating between a woman and a man. It is one of the most poetic books in the Bible, and certainly the most erotic. Its writing is traditionally attributed to Solomon, King of Israel. The love described is very much a sensual love, continually referencing the exaltation of beauty and physical relationships: ‘Let him kiss me with kisses from his mouth! For your kisses are better than wine’.

This edition, with engravings by Lobel-Riche, is something of a pot-boiler, but his plates are very much in his trademark accomplished style.