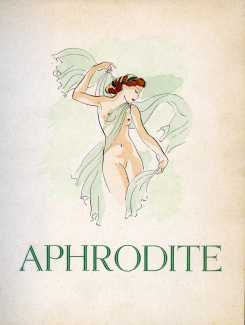 By the time Éditions de la Mappemonde commissioned Renée Ringel to produce sixteen watercolours for this edition, Aphrodite was an established vehicle for acceptable mild titillation, which Ringel managed perfectly with the novel’s protagonists engaged in naked but relatively chaste interactions.

Aphrodite was produced in a limited numbered edition of 1,500 copies.