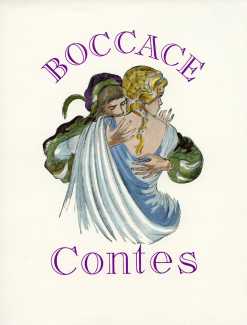 In 1940 the Paris-based publisher Éditions Terres Latines embarked on a series of illustrated classics, Leurs Chefs d’Œuvre (Their Masterpieces), which eventually ran to nearly a hundred titles. One of the first volumes to appear was this short collection of stories from Boccaccio’s famous Decameron. The hundred tales in the collection by the fourteenth-century Italian writer Giovanni Boccaccio include many which are highly erotically charged, and Terres Latines chose twenty of these for this edition, commissioning Ringel to add eight colour plates.

These turned out to be the most interesting and original paintings that Renée Ringel produced, and it is a pity that the freedom of line and colour shown here was not continued in her later work. Indeed, given the change in style from this to the later work, it makes us wonder if ‘Renée Ringel’ was actually more than one artist.

Boccace: Contes was produced in a limited numbered edition of 1,600 copies.