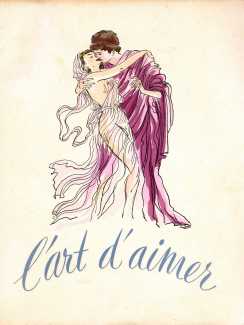 The Roman poet Ovid’s Ars Amatoria (The Art of Love or L’art d’aimer) is a classic of instruction about intimate relating, and even though written two thousand years ago (it is thought in 2CE) much of its teaching remains more or less pertinent, like not forgetting someone’s birthday and letting them miss you – but not too much. The standard translation from Latin to French was made by Héguin de Guerle (1793–1881); it is a rather stilted version, but it had the advantage of being freely available for Terres Latines to use in their Leurs Chefs d’Œuvre (Their Masterpieces) series.

Renée Ringel was again commissioned to produce an acceptable amount of naked female flesh, including a little light lesbianism, and the results are sweet without becoming saccharine.

L’art d’aimer was produced in a limited numbered edition of 1,600 copies.