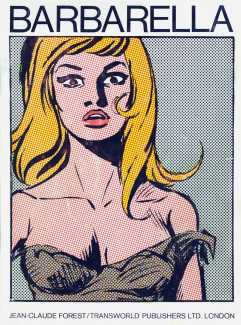 Jean-Claude Forest created the character of Barbarella for serialisation in the French V Magazine in the spring of 1962, and in 1964 Eric Losfeld published the strips as a standalone book titled Barbarella. The book caused a scandal and became known as the first adult comic book, and was soon published in more than a dozen languages. For her creator, the character embodied the modern, emancipated woman in the era of sexual liberation, and as a result Barbarella is considered an important part of the mid-twentieth century sexual revolution.

The most sexual thing about Barbarella is her willingness to have sex. She has encounters of varying magnitude throughout the book with men, women and robots, all portrayed quite tastefully, with everything explicit hidden between panels. The issue of consent sometimes feels a little murky, as is often the case in fiction from this period, but Barbarella’s enjoyment of her encounters is never in doubt. ‘Diktor, you have real style,’ she says to a female robot after a night together; ‘Oh, madame is too kind,’ replies Diktor, ‘I know my shortcomings; there’s something a bit mechanical about my movements’.

Jean-Claude Forest regarded his creation as the futuristic extrapolation of the modern, free-love-practicing, empowered woman. For all the danger she encounters in these engaging storylines, what gets her into trouble is usually her endless curiosity for what wonders a newly discovered planet might hold, not just her willingness to hop into bed with that planet’s inhabitants.

In 1967 Barbarella was adapted by Terry Southern and Roger Vadim into a major motion picture, with Forest acting as design consultant. Having expressed an interest in comics and science fiction, Vadim was hired to direct Barbarella after producer Dino De Laurentiis purchased the film rights to the comic series. Vadim attempted to cast several actresses, including Brigitte Bardot and Sophia Loren, in the title role before choosing Jane Fonda, then his wife. The film was particularly popular in the United Kingdom, where it was the year’s second-highest-grossing film. Contemporary film critics praised Barbarella’s visuals and cinematography, but found its storyline weak after the first few scenes. Although several attempts at sequels, remakes, and other adaptations have been planned, none of these have entered production.

Barbarella in print was relaunched as an ongoing series by the American publisher Dynamite Entertainment in December 2017, with writer Mike Carey and Kenan Yarar as artist. Another relaunch came in May 2021 by writer Sarah Hoyt and artist Madibek Musabekov, which ran for ten issues. After the announcement of a remake movie, Dynamite announced in November 2022 it plans to relaunch the comic again, with Sarah Hoyt as writer and Riccardo Bogani as artist.