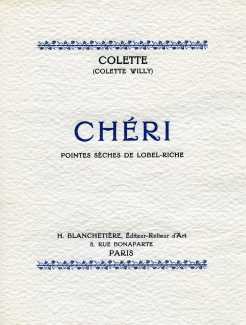 Chéri, first published in 1920, is a semi-autobiographical work by the author who was always known as Colette, though her full name was Sidonie-Gabrielle Colette. Colette was also a mime, actress, and journalist, and is best remembered for her 1944 novella Gigi.

A year or so after this book was published, Colette, then in her late forties, started an affair with her much younger stepson, Bertrand, and in many ways the novel uncannily predicts the author’s own experiences. In Chéri, Léa de Lonval, who is forty-nine and a former courtesan, is living with Chéri, whose real name is Fred Peloux. Chéri is a spoiled and lazy twenty-five year old and the son of Charlotte, an old friend of Léa and also a former courtesan. Léa has been with Chéri for six years; she realises that this might be her last affair, and has tried to make a man of him, both physically and mentally. However, Chéri is about to marry Edmée in an arranged marriage. Léa accepts this, but is unsure of what it will mean to her. However, Edmée is only eighteen, and Chéri finds her too young for him. The marriage does not work out well, and, eventually Chéri returns to Léa, though as she sadly finds out not for good and with little improvement.

This illustrated edition of Chéri was the first to include plates, and the subject matter was clearly attractive to the artist, at this time at the peak of his career. Four years later, in 1929, Vertès produced another set of plates for Colette’s novel, which you can see here – it is interesting to compare the very different styles of two contemporary artists, both of whom almost certainly knew the writer.

The Lobel-Riche edition of Chéri was published by H Blanchetière, Paris, in a limited numbered edition of 275 copies. Our copy includes versions of the plates both with and without ‘remarques’, additional marginal drawings, plus a titillating ‘planche refusée’, which of course was not ‘refused’ at all, but an intentional part of the whole package.