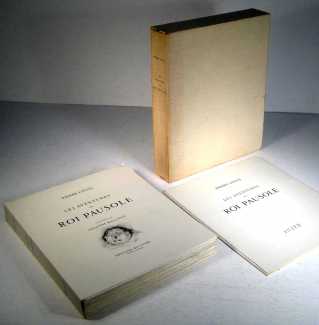 Suzanne Ballivet’s first major book commission was a suite of illustrations for Monte Carlo publisher Éditions du Livre’s version of Pierre Louÿs’ Les aventures du Roi Pausole, his ever-popular libertine tale set in the realm of Tryphême, where King Pausole rules with the support of his 366 wives and his wayward daughter, the fair Aline.

The book had already been illustrated by several noted artists, of whom Tsuguharu Foujita, Carlègle, Raymond Brenot, Umberto Brunelleschi and Jacques Touchet are among those whose versions can be seen on this website.

The 1945 Éditions du Livre volume is illustrated with 37 lithographs based on Suzanne Ballivet’s pencil drawings. The rotund king and his entourage of beautiful young women – and in Tryphême the young and beautiful are expected to go naked at all times – are sensitively and humorously depicted, and it is easy to see how the freedom exhibited by so many nubile bodies would have appealed to a readership emerging from wartime restraint.

The edition was limited to 965 numbered copies presented in a slipcase, with a separate suite of eleven additional engravings not included in the main text.