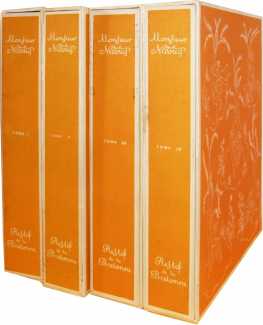 It is a fitting tribute to Suzanne Ballivet and to her publisher, Edition du Cent Cinqauantenaire, that they are the only collaboration ever to have produced a high-quality illustrated edition of Restif de la Bretonne’s enormous masterwork, Monsieur Nicolas ou le coeur humain dévoilé (Monsieur Nicolas, or the Human Heart Unveiled).

Between 1794 and 1797 he wrote the sixteen volumes of Monsieur Nicolas, including his memories, his thoughts about ethical and social points, his hatreds, and above all his numerous loves, both real and fancied. He is particularly vivid in his descriptions of his early sexual awakening, women’s clothes and particularly their shoes being especially powerful, such that he is often cited as the first recorded shoe fetishist.

Suzanne Ballivet’s 96 delicate pencil drawings capture Restif’s life from childhood to old age, providing a welcome foil to the elegant typography of the text. The four-box Edition du Cent Cinqauantenaire set of Monsieur Nicolas was produced in a limited numbered edition of 492 copies, of which forty included a separate set of illustrations.

For English-language readers, a complete translation of Monsieur Nicolas was published by John Rodker in six volumes in 1930; the translation is a good one, but the books are hard to find.