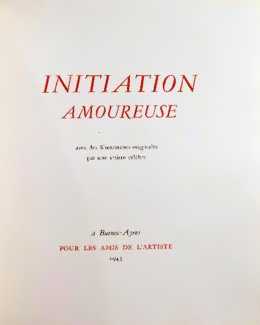 Initiation Amoureuse, a retitling of Prélude charnel (a work with a fascinating history, for which follow this link), was published in a limited edition of 200 copies in 1950, though the imprint page gives the publication date as 1943 – why we can only guess. The publisher was Georges Guillot, a much-respected resistance fighter during the German occupation who Suzanne Ballivet probably met while she and Albert Dubout were spending a lot of time in Paris in the late 1940s.

The book, produced as so many similar volumes were in a handsome cream and red slipcase or étui, also says that it was published ‘in Buenos-Ayres’, though this is as unlikely as the supposed date of publication.

The handsomely-produced volume contains twenty-five coloured engravings by Ballivet, of which fifteen are hors-texte – smaller images on pages which are mostly text.

The images are notable both for the straightforward honesty in relation to the two young people exploring each other’s bodies, and for the fact that they are by a woman, with none of the careful coyness and voyeurism of many male illustrators. At the time the images were created Suzanne Ballivet was herself exploring her new intimate relationship with Dubout, an illustrator equally fascinated by the possibilities of unrestrained sexuality, and the resulting freshness and playfulness are clearly apparent in her illustrations for Initiation Amoureuse.