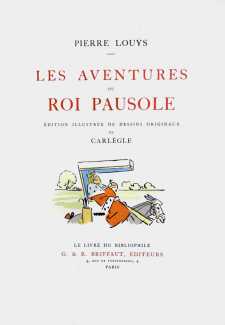 At the height of his illustration career in the mid-1920s, Carlègle was a natural choice when the major Paris publisher Georges Briffaut wanted to commission new illustrations for Pierre Louÿs’ Les aventures du Roi Pausole. Louÿs’ ever-popular libertine tale set in the realm of Tryphême, where King Pausole rules with the support of his 366 wives and his wayward daughter, the fair Aline, had been illustrated several times before, but what was needed was a bold, colourful treatment which made the most of the Tryphême tradition that all young beautiful women go naked whenever possible.

Carlègle’s stylish penmanship and watercolour, combined with his wit and ability to convey a mood with the minimum of line, bring Louÿs’ tale to life in a way rarely achieved by its other illustrators; only Marcel Vertès, Clara Tice and Suzanne Ballivet achieve a similar result.

The Briffaut edition was produced in a limited numbered print run of 925 copies.