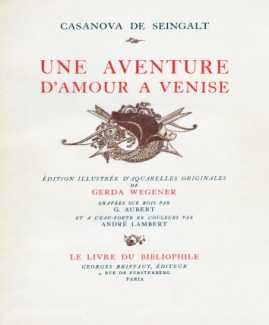 The prolific Paris-based publisher Georges Briffaut knew a good and marketable illustrator when he met one, and following the success of Les délassements de l’Éros he commissioned Gerda Wegener to produce illustrations for a luxury edition of the selected memoirs of one of the most infamous lovers of all time, Giacomo Casanova, Chevalier de Seingalt (pronounced Saint-Galle in the French fashion) – after his exile from Venice to France in 1757 he often signed his works Jacques Casanova de Seingalt.

Gerda produced ten finely-detailed paintings which were beautifully rendered and embellished by master engraver André Lambert. All but the most costly 25 copies included just eight of the ten illustrations.

Une aventure d’amour à Venise was published in a limited numbered edition of 500 copies, of which 25 included a separate set of the illustrations in preparatory states, and the first ten one of the original paintings.