The Etchings of Norman Lindsay 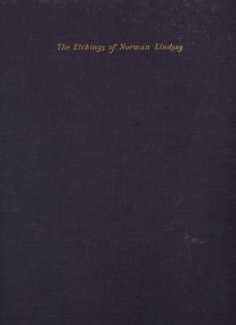 Constable & Co, Australian publishers of fine limited editions, were aware of Norman Lindsay’s etchings as early as 1922 when they were the London publishers for Art in Australia. In 1925 they had further evidence of the quality of the work when Lindsay held an exhibition at London’s Leicester Galleries, where the etchings were very popular. The Etchings of Norman Lindsay is a handsome volume with each plate presented full page, accompanied by a cover page indicating the plate number, title and date.

Lindsay was delighted with the quality of the reproductions. In 1928 he wrote to Andrew Watt, one of his wife Rose’s private clients: ‘I’m glad you liked the Constable production of the etchings. It really is as facsimile perfect as reproduction can be.’

For many years, books illustrated by Norman Lindsay have been broken up for the illustrations, which has had the effect of making the original book extremely rare. Mounted individual plates from the book were being sold immediately after publication for 21 shillings each, a handsome profit for the vendor.

There are 45 reproductions of Lindsay’s etchings in alphabetical order, and the book contains a chronological list of the 84 published etchings from 1918 to early 1925. The book was issued in a numbered limited edition of 129 copies.