A Homage to Sappho

Norman Lindsay’s oldest son Jack was 28 when he collaborated with his father on what has been called one of the finest and rarest of Australia-related private press books.

As Lisa Featherstone has written in her 2014 study Let’s Talk about Sex: Histories of Sexuality in Australia from Federation to the Pill, ‘The lesbian was beginning to infiltrate popular culture, within radical circles at least. Famed for their heterosexual adventures, Norman and Jack Lindsay wrote a peculiar and rather inextricable tribute to Sappho in 1928. A beautifully-illustrated, gorgeous book, it was a sensual libertarian defence of the lesbian, presumably designed as titillation of male readers. In the introduction the Lindsays described the lesbian clichés of interwar Australia: “Either she was the head of a sentimental blue-stocking academy where tendernesses in verse were exchanged amid the curriculum of musical thought and bridal etiquette, or she was a dreadful seducer of young girls”.’ 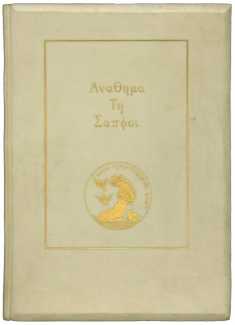 A Homage to Sappho, with the cover and title page in Greek, contained ‘translations of the fragments’ by Jack, and fifteen etchings by Norman. It was published by The Fanfrolico Press, a private press established by Jack Lindsay with his friends P.R. Stephensen and John Kirtley, initially in North Sydney but from 1926 in London.

A Homage to Sappho was published in a numbered limited edition of 70 copies.