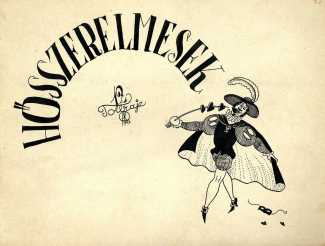 Hősszerelmesek (Leading Men) is probably Székely’s best-known portfolio, and appears to be one of the few to be reproduced in multiple copies. It shows him at his most inventive and humorous, his ‘leading men’, from Nero, Casanova and Henry VIII to Chopin and Rudolf Valentino, portrayed in recognisable roles with added sex. Interestingly, not all copies include the same twelve images, which is why, although the title page indicates twelve illustrations, seventeen are shown opposite.

Unlike some of Székely’s work of the period, which seems rather crude, these are accomplished, carefully composed illustrations.