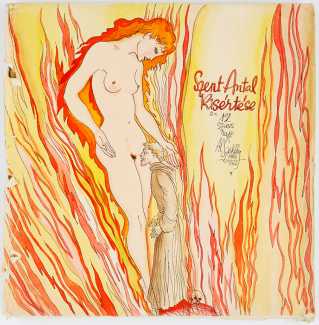 ‘Szent Antal kísértése’ (‘The Temptation of St Anthony’) is a series of twelve Székely watercolours, of which six are reproduced here; if you can help us locate the others in the series please let us know. The title page suggests that there may have been two versions of this series, the first completed in 1962 and the second in 1966.

St Anthony the Great, sometimes referred to as the Father of All Saints, was an early Christian Egyptian monk. He is famously said to have faced a series of supernatural temptations during a pilgrimage to the desert in the late third century, a scenario which was regularly depicted by painters including Hieronymus Bosch and Michelangelo.