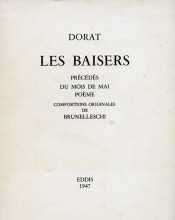 Dorat was born in Paris into a family of lawyers, and after joining the king’s musketeers he started to write heroic epistles, most famously his Réponse d’Abélard à Héloise (Abelard’s reply to Heloise), verse, and plays. In the latter he was spectacularly unsuccessful, and attempted to cover up his failures as a dramatist by buying up large numbers of seats for performances of his plays.

Almost his only work to be reprinted in the twentieth century is this cycle of love poems, illustrated in this 1947 edition by an aging Brunelleschi. The illustration style is vintage Brunelleschi, though the production quality of this edition published shortly after the end of Word War II left much to be desired.

Les Baisers was produced by Eddis in a limited numbered edition of 2,000 copies.