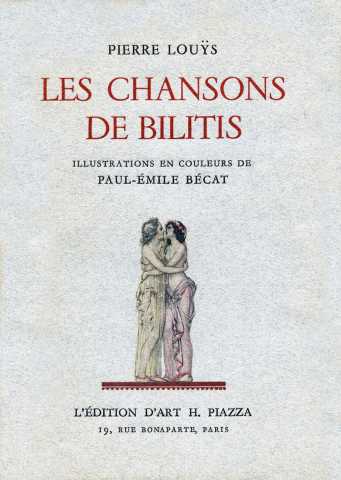 Bilitis is one of the most successful literary frauds of all time, and most of Louÿs’ early readers honestly believed that they were reading genuine translations of rediscovered ancient poetry found on the walls of a tomb in Cyprus, written by a woman called Bilitis who was a courtesan and contemporary of Sappho. In the 143 poems Bilitis shares her most intimate thoughts, from childhood innocence in Pamphylia to the loneliness and chagrin of her later years. To lend authenticity to the forgery, Louÿs listed some poems as ‘untranslated’; he even craftily fabricated an entire section of his book called ‘The Life of Bilitis’, crediting a fictional German archaeologist as the discoverer of Bilitis’ tomb. Though Louÿs displayed great knowledge of ancient Greek culture, ranging from children’s games to the application of scents in, the literary fraud was eventually exposed. This did little to taint its literary value, and Louÿs’ open and sympathetic celebration of lesbian sexuality earned him both popularity and historic significance.

Although for the most part Les chansons de Bilitis is original work, many of the poems were reworked epigrams from the Palatine Anthology, and Louÿs even borrowed some verses from Sappho herself. The poems are a blend of mellow sensuality and polished style in the manner of the Parnassian school, but underneath run subtle French undertones that Louÿs could never escape.

The Bécat-illustrated Bilitis was published in 1943 by L’édition d’art H. Piazza, a well-known Parisian literature and art publisher whose other illustrators included Rackham, Dulac and Brunelleschi. The wartime print quality of the limited edition of 3,200 copies is not as good as many Bécat volumes, but his style is unmistakable.