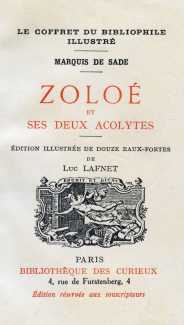 Published anonymously in 1800, Zoloé et ses deux acolytes (Zoloé and her two attendants) is now commonly accredited to the Marquis de Sade, though some still question the attribution. There were very good reasons for Sade, if it were his, to deny authorship. Orsec in the novel is clearly modelled on Napoleon Bonaparte, his future wife Zoloé on Joséphine de Beauharnais, and the two attendants Lauréda and Volsange on Theresa Cabarrus and Mlle Visconti, both of whom had a reputation for debauchery. Even though Joséphine’s sexual exploits were well-known, de Sade knew that Napoleon had a vengeful nature. Napoleon ordered de Sade’s arrest in 1801, but contrary to popular belief it was probably not Zoloé that precipitated the police action; it was more likely to have been the imminent publication of Juliette, with its overtly political undertones.