Victor Margueritte’s groundbreaking and shocking 1922 novel La garçonne (probably best translated as The Bacheloress) is a perfect text for Bécat’s mature style. A prolific author, Margueritte (1866–1942) was born in Algeria, and served in the same regiment, the Chasseurs d’Afrique, as had his decorated father Jean Auguste. La garçonne is by far his best-known novel, and was considered so scandalous at the time that it resulted in Margueritte having his Légion d’Honneur award revoked. 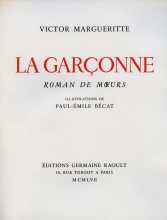 Monique Lerbier, the ‘bacheloress’ of the title, is an emancipated French woman who leaves home to escape a marriage of convenience to a man whom her parents have forced on her. She explores a wide range of carnal temptations, including a lesbian love affair with a singer. Margueritte’s portrayal of a brazenly independent ‘new woman’ quickly elevated La garçonne to best-seller status. What is just as shocking as the reckless behaviour of its heroine, depicted as a victim of psychological torment, is the portrait of the corrupt postwar society in which she lives. The lovers that Monique encounters, set against the hostile and contemptuous portrayal of her peers and a judgemental society, only serve to amplify her struggle.

La garçonne was translated in the USA in 1923 in a bowdlerised edition as The Bachelor Girl, as the many passages describing sexual acts that had caused offence in Paris could not be reproduced in America. A complete edition in English, ably translated by Brian Stableford, was published by Black Coat Press in 2015. The novel has been filmed four times, in 1923, 1936 (with Marie Bell and Edith Piaf), 1957, and 1988.

The Bécat-illustrated edition of La garçonne was published by Editions Germaine Raoult in a numbered limited edition of 975 copies.