Thémidore, ou mon histoire et celle de ma maîtresse (Thémidore, or the history of myself and my mistress) is a rather tedious pseudo-biography written in 1744 by a rather boring minor French marquis and amateur librettist, one Claude Godard d’Aucourt (1716–95). Godard became a Fermier-Général in Alençon in 1754 and Receveur-Général des Finances in 1785. He successfully managed to retain his estates during the French Revolution, and perhaps his best legacy (apart from a text to which Jean Dulac added these rather wonderful illustrations) was his son, Claude Godard d’Aucourt, Baron de Saint-Just (1769–1826), who was a more successful writer and operetta librettist than his father had ever been. 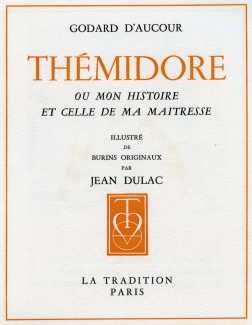 Though Thémidore, and d’Aucort’s other libertine effort, Mémoires turcs, avec l’histoire galante de leur séjour en France (Turkish Memoirs, or the gallant story of two Turks during their stay in France), published in 1785, are not great literature, they did both attract the attention of the French police, and had to be published ‘abroad’, in ‘Amsterdam’ and ‘Constantinople’ respectively (though in fact in Paris).

Jean Dulac’s illustrations are in his unmistakable style, the marquis bearing a clear resemblance to the only known bust of the work’s author.