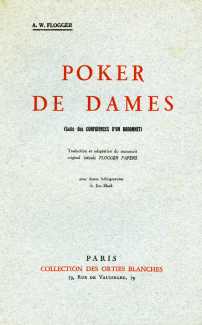 ‘Then he spread her on the mattress and raised her chemise. She slumped like a mass, her face in the pillow, soft and resigned. Her spreadeagled posture emphasised the splendour of her form: her smooth, broad, white back with its deep central gutter, her strong fleshy waist, narrow, arched as if to support the weight of the most magnificent pair of buttocks that it is imaginable to conceive and make the acquaintance of in a woman’.

Poker de dames (Women’s Poker; the pun is deliberate) is one of a series of spanking novels published between 1910 and 1932 by the prolific publisher Jean Fort under the series title Collection des Orties Blanches (White Nettle Collection), and is the sequel to Les confidences d’un baronnet (Reminscences of a Baronet), which you will find here. Corporal punishment was seen by the French as ‘the English vice’, and the books were popular with English businessmen visiting the French capital.

These two books were supposedly translated from the English-language The Flogger Papers of Lady Buttock, though no such English-language originals exist. Jean Fort commissioned Lafnet to produce illustrations for both books, all signed with the pseudonym ‘Jim Black’.