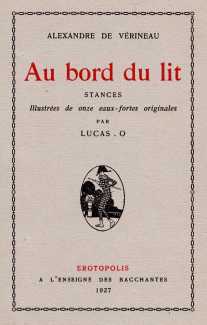 Au bord du lit (On the Edge of the Bed) comes from the copious pen of Louis Perceau, here writing under the pseudonym Alexandre de Vérineau. Comprising eleven poems, it follows a long tradition of praising the ‘classic’ sexual positions in verse. Luc Lafnet, the illustrator, also appears under a pseudonym, Lucas O.

Au bord du lit was published in Paris (or ‘Erotopolis’ if the cover is believed) by Maurice Duflou under the imprint A l’enseigne des bacchantes; it is dated 1927, but was actually published in 1931. It was produced in a limited edition of 350 copies.