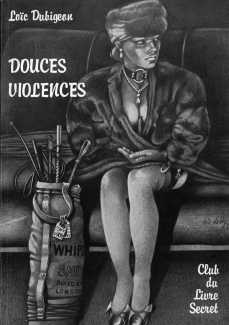 Loïc Dubigeon was first commissioned to create illustrations to accompany Pauline Réage’s Histoire d’O when the illustrated book publisher Editions Borderie saw some of Dubigeon’s nudes at an exhibition in Munich in the summer of 1981. You can see his illustrations to this edition here. He continued to produce drawings based on his response to the story, and by 1990, two years before his death, had produced nearly a hundred new works in several large sketchpads. The Club du Livre Secret published many of these in a volume called Douces violences, an expression which translates literally as ‘sweet violence’, but which in French covers a range of subjects from ‘tough love’ in relation to children’s behaviour to BDSM roleplay.

In the preface to the collection, the publishers write: ‘Illustrating a literary work is an exercise which has always been favoured by publishers hoping to win over those readers discouraged by texts consisting solely of words. The Story of O, it goes without saying, is a great book; surely such sumptuous prose could only be demeaned and reduced by attempting to illustrate it. So we must appreciate Loïc Dubigeon’s attempts to provide illustrations to accompany the most celebrated erotic text of our age. He has given free rein to his imagination, and his images should be seen as his personal response to his reading of The Story of O. It would be pointless to search here for specific scenes from the book, though all its significant elements are here: the leather, the whips, the bodies. Here we have a new work of art which leaves Pauline Réage’s book intact, but adds Dubigeon’s fitting artistic response to it.’

Sadly the print quality of Douces violences leaves a lot to be desired, but the collection is testimony to Dubigeon’s artistic skill and prodigious imagination.