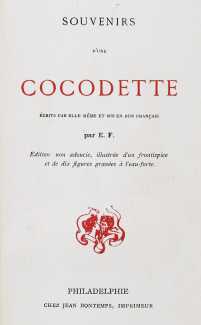 One of the earliest portfolios shown here, this late 1870s edition of Ernest-Aimé Feydeau’s notorious Souvenirs d’une cocodette uses a variety of illustrations from at least two artists. The only reference to the illustrators, from the record held by the Bibliothèque nationale de France, gives their names as Jean Beauduin (1851–1916) and Victor Coindre (1816–1893), though both are given as ‘possible artists’.

Ernest-Aimé Feydeau (1821–73) was a French writer and the father of the notorious comic playwright Georges Feydeau. He was born in Paris and began his literary career in 1844 with a volume of poetry, but it was with his novel Fanny in 1858 that he became best known as a writer, a success due chiefly to the cleverness with which it depicted and excused the corrupt manners of a certain portion of French society. This was followed in rapid succession by a series of similar fictions, including in 1878 Souvenirs d’une cocodette, écrits par elle-même (Souvenirs of a High-society Prostitute, written by Herself). 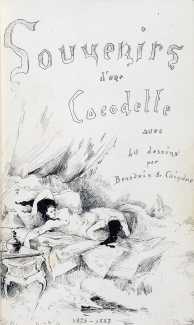 The illustrations themselves are very crude, though do manage to convey some of the (equally-crude) qualities of the text. The remarkable thing is that such explicit material was being produced in Paris in the 1870s.