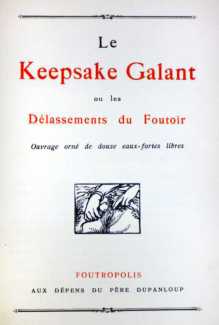 Another intriguing French volume illustrated by the ubiquitous Anon, this ‘gallant keepsake’ was published with the subtitle ‘Les délassements du boudoir’, the pleasures of the bedroom. The texts, by well-known authors including Verlaine, Delvau, Baudelaire, Béranger, Gautier, Musset and Nerciet, are neither here nor there, but the calendrical illustrations are well-drawn and witty. The sharp-eyed among you may notice that, although published in 1924, the drawings appear to much earlier – if you did then well done, they are actually reproduced from the Fredillo calendar of 1894, which you can see in all its glory, including some coloured versions, here.

Published ‘at the expense of Father Dupanloup’ at ‘Foutropolis’ (‘the capital of messiness’), it is thought that the risqué poet Louis Perceau was the editor of this volume and Maurice Duflou the publisher.