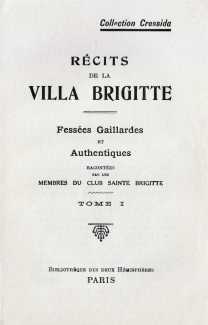 Long before Orties Blanches, however, Jean Fort was producing spanking material, very much with his English customers in mind. One of the first was Récits de la Villa Brigitte: fessées gaillardes et authentiques racontées par les membres du Club Sainte Brigitte (Tales of the Villa Brigitte: Cheerful and Authentic Spankings as told by the Members of the Club Sainte Brigitte), published in the ‘Collection Cressida’ under the Deux Hémisphères (and we know exactly which two ‘hemispheres’ he had in mind) imprint.

In fact it appears that this series of spanking yarns started life in English, as a single-volume edition of the Tales by one ‘F.L. Harris’, with six poor monochrome illustrations by ‘Mae Walman’. It was published under the Societes des Livres Erotques (sic) imprint – almost certainly another of Fort’s, possibly in collaboration with Charles Carrington – in 1910.

The two-volume French edition of Villa Brigitte was text-only, but at some point contemporaneously with the book this series of sixteen coloured illustrations was created by an unknown artist, and tipped in to at least one copy. Notable for their copious depiction of pink double hemispheres in multiple situations, the illustrations are more explicit than most of the time.

A taste of one of the stories:

I was by now anxious for the tilt, and taking the lady under my left arm I tucked her clothing up as high as her waist. Holding her tightly I let fall on her bare bottom a few sonorous though harmless slaps. The lady wriggled her arse somewhat, not because of the pain but apparently from satisfaction. I went on for a few minutes with that light smacking; it was a real pleasure to slap the fleshy, hard, round rump. My victim endured this punishment without uttering a single cry and without manifesting, other than by involuntary actions of her bum, that the sensations were anything than pleasant to her.
‘Do you enjoy that? Am I an expert flogger?’ I mumbled in her ear.
‘Not a bit of it!’ she replied; ‘You don't even know how to make a woman’s arse blush. With my husband it’s very different, I can tell you.’
‘Oh, is that so?’ I replied, somewhat vexed. ‘You wait a minute and you shall soon see!’
With that I began to lay on with a vengeance with the result that I soon brought the blood to the skin, and although her bottom was fully exposed to the air in the rather cool room, it soon became quite warm! She uttered a few groans of pain, but made no attempt to escape my grasp.
‘Now what do you think of my ability at flogging?’ I asked between two hard smacks. I had been laying on the smacks with all my force, and they must have stung her tender flesh severely.
‘Yes, that’s better,’ she replied in a low tone; ‘that's the proper way to do it.’ She straightened herself up, rubbing her bottom with her hands and a rueful expression on her now red and flushed countenance. Her face bore a passionate expression and was quite red. She then started to disrobe, slowly removing a garment at a time while I watched her, fascinated as she revealed to me one by one the charms of her person, until she finally stood naked before me, her hips moving slowly and sensuously.
Her breasts, of a somewhat voluminous size, stood out firmly, and I rubbed my face against them as I fondled her charms, both front and rear. My right hand slapped her large and rounded buttocks with a sound similar to the bursting of a paper bag.
I kissed her lips, her eyes, her cheeks; she was now trembling and quivering under my caresses like a cat that is being fondled. She was apparently carried away with lust and passion. But this dalliance could not be continued for long.
My organ was now so loud in its demands of personal satisfaction that the young woman who had with her own hands fondled and encouraged it in its erection raised her eyes to the ceiling in an expression of wonderment at its size.
‘Well,’ she said, nodding significantly, ‘she who gets that between her thighs will be well served!’