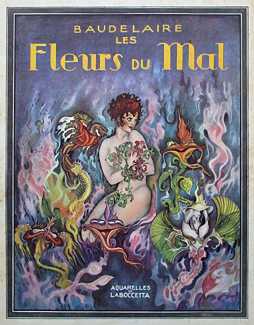 A highlight of this period is Laboccetta’s wonderful illustrations for Baudelaire’s Les fleurs du mal, perfectly adapted to the themes of the poems. Art critic Giuseppe Marotta, an admirer of Laboccetta, wrote that ‘This is a superb edition, depicting a colourful world with no less originality than that of Salvador Dali.’

At the end of 1933, following a period of growing financial pressure, Nilsson was forced to sell its catalogue to Éditions Gründ and terminate contracts with its talented band of illustrators; Laboccetta was one of the victims.