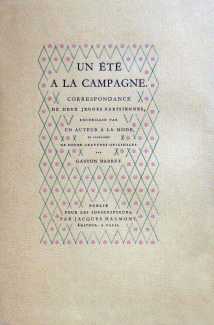 Un été à la campagne: correspondance de deux jeunes parisiennes, recueillie par un auteur à la mode (A Summer in the Countryside: The Correspondence of Two Young Parisiennes, Collected by a Fashionable Author) is little more than a vehicle for a commissioned series of illustrations featuring naked young women, but it does show clearly how Barret had segued easily into the style of the 1960s.

The Barret-illustrated version of Un été à la campagne was published by Jacques Haumont in a limited numbered edition of 471 copies.