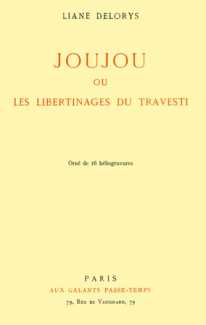 Joujou, ou les libertinages du travesti (Joujou, or the Transvestite Libertines) was Hérouard’s first illustration commission for Jean Fort’s erotic imprint Aux Galants Passe-temps, and also the first very successful combination of Herric illustrations with the profuse writings of ‘Liane Delorys’, almost certainly a woman probably named G. Donville, who also wrote under the names of ‘Liane Laure’, ‘Liane Lauré’, ‘Liane de Lorys’, ‘Liane de Lauris’ and ‘Lucette de Chatay’. Joujou is one of the first Fort texts to delve into the depths of cross-dressing, and was one of Fort’s more successful titles. Like so many similar volumes, it was banned by the French censors in 1953, but reissued in 1958 by Éditions de l’Éden under the title Travesti chéri.

Joujou was published by Aux Galants Passe-temps in a numbered edition of 2050 copies.