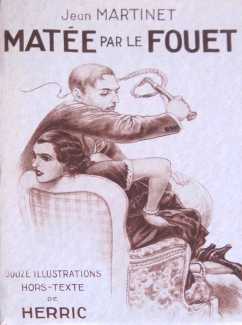 Matée par le fouet (Mastered by the Whip) is the first illustrated sado-masochistic title to be illustrated by Hérouard under his Herric pseudonym. ‘Jean Martinet’ is also a pseudonym, used just twice, here and as the author of Venez ici, qu’on vous fouette!, also illustrated by Hérouard and included in our portfolios. It may well be an oblique reference to the seventeenth-century soldier Jean Martinet, who was a lieutenant-colonel in the French army and one of the first great drill masters.

Matée par le fouet is considered one of the classics of ‘the golden age of spanking’ which peaked in the 1930s. Much of the output of spanking literature during this period was by French publishers, writers and illustrators, eagerly collected by visitors to the French capital. Hérouard’s graphic and varied representations of the art no doubt contributed much to the success of this title in particular and to Prima’s reputation in general. The newly-founded publishing house went on to publish more than a hundred titles by the end of the 1930s.

‘While in men it is possible to trace a tendency to inflict pain, or the semblance of pain, on the women they love, it is still easier to trace in women a delight in experiencing physical pain when inflicted by a lover, and an eagerness to accept subjection to his will. Such a tendency is certainly normal. To abandon herself to her lover, to be able to rely on his physical strength and mental resourcefulness, to be swept out of herself and beyond the control of her own will, to drift idly in delicious submission to another and stronger will – this is one of the commonest aspirations in a young woman’s intimate love dreams. In our own age these aspirations most often find their expression in such dreams.’

Matée par le fouet was published by Éditions Prima, and translated into English by A. de Granamour, published as Mastered by the Whip in 1938 by the Olympia Press.