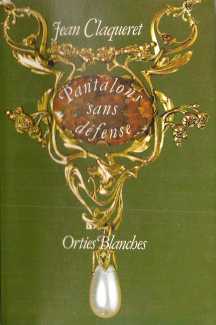 Pantalons sans defense (Defenceless Knickers) is one of those titles that is like a magnet to its readership. Like most of Jean Fort’s offerings, the very predictable text is written under a pseudonym, ‘Jean Claqueret’ (‘claquerer’ translates as ‘slamming, banging’), which may or may not be another cover for Madame Donville. ‘Jean Claqueret’ wrote several other titles for the Collection des Orties Blanches (White Nettle Collection), including Clotilde et quelques autres (Clotilde and Friends), Humiliations chéries (Darling Humiliations), and Les faisceaux rouges (Red Cheeks).

The indifferent text is redeemed by Hérouard’s illustrations, now very much in the swing of his spanking imagination. As he wrote to his biographer René Druart about this time: ‘My favourite subjects are still the women of the belle époque who generously showed their naked backs and bosoms. I only subsequently cultivated my “rascal art”, but in the depths of myself I really lived between the twelfth and sixteenth century. By scandalising my contemporary fellow citizens, albeit very conscientiously, I can sneakily indulge my deep tendencies by thinking of them as their historic counterparts, remembering that even the most beautiful girl in the world would quickly become boring if I could not imagine them in the mirror of history.’

Pantalons sans defense was published by Jean Fort in his Collection des Orties Blanches (White Nettle Collection); it and other ‘Jean Claqueret’ titles were resissued in the 1950s by Eric Losfeld’s Editions de l’Eden.