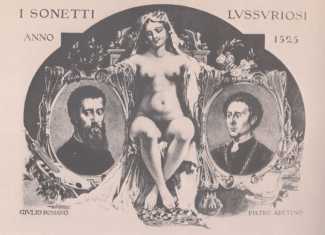 The text used is that of the 1882 edition of Aretino produced by the Paris bookseller/publisher Isidore Liseux, but the purpose of the new edition was more to sell the illustrations and the French translations of the sonnets than to introduce its readership to Liseux’s learned text.

The full story of Aretino’s sonnets and the Raimondi illustrations can be found here in the ‘Themes and topics’ section of honesterotica.

The Avril-illustrated edition of Les sonnets luxurieux was published by Charles Hirsch in a limited numbered edition of 500 copies.