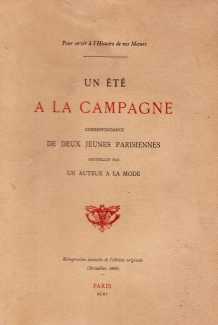 Un été à la campagne: correspondance de deux jeunes parisiennes, recueillie par un auteur à la mode (A Summer in the Countryside: The Correspondence of Two Young Parisiennes, Collected by a Fashionable Author) is by Antoine Gustave Droz (1832–95), the artist and author best known for his series of sketches of the intimacies of family life, published in the La Vie Parisienne and issued in book form in 1866 as Monsieur, Madame et Bébé. He was an early advocate of marriage as an equal partnership, and intimacy as an integral aspect of a truly loving relationship. He urged women to follow their hearts and marry a man of their own age: ‘A husband who is stately and a little bald is all right, but a young husband who loves you and drinks out of your glass without ceremony is better. Let him, if he ruffles your dress a little and places a kiss on your neck as he passes. Let him, if he undresses you after the ball, laughing like a fool. You have fine spiritual qualities, it is true, but your body is not bad either, and when one loves, one loves completely.’

The illustrations to this edition, though anonymous, are of a high quality; it has been suggested that they may possibly be by Édouard-Henri Avril.

This edition of Un été à la campagne was published in Paris; no publisher’s name is given but it was probably C. Hirsch. It was produced in a limited numbered edition of 330 copies.