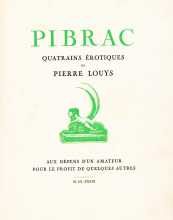 Like the rest of Pierre Louÿs’ voluminous output of erotica, Pibrac (sometimes spelt Pybrac) was not published during his lifetime, but instead figured among the many secret manuscripts discovered after his death, tucked and filed away, and subsequently auctioned off and scattered among collectors. It would see its first clandestine publication in 1927, two years after the author’s death.

The Berthomme Saint-André edition of Pibrac was published ‘Aux dépends d’un Amateur pour le Profit de Quelques Autres’ (At the expense of an amateur for the benefit of the few others), in a limited numbered edition of 308 copies, of which 28 included both a duotone set of the engravings and the set illustrated here with remarques (marginal additional sketches) by the artist.